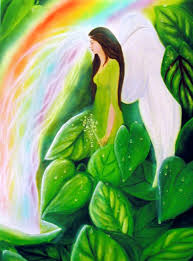 In the everyday, ordinary dimension of reality and conversation, the pronouns “me”, “I”, and “mine” appear to be necessary to describe our experiences, our possesions, and our boundaries.  They are markers for the territory of the small, attached, egoic self.

Yet in the spiritual dimension of reality, being free of this type of identification with things is found to be liberating.  I have heard this paradoxical truth many times and yet today, for the first time, while meditating, an image of a vine appeared which was connected to an experience of many years back, which helped make this truth accessible and usable to I, the soul.

It was an experience from the wonders of Mother Nature and how she works which I’m sure I will recall again and again on this mystical journey of a life of truth. Hopefully it will reveal something to you, the soul as well.

The image of the vine was the one that had grown out of a compost heap fed by kitchen scraps and other organic matter which I had created under the banana trees which bordered the neighbor’s property, making it unclear where his land begin and mine ended.

One magical morning I noticed the vine growing out of the rich soil that had formed under the trees, was a kambucha pumpkin vine.  These pumpkins are more like a delectable squash and grow very well on the island.  The vine evidently sprouted out of the leftover pumpkin seeds that had been added to the compost heap many months before!  Finding the pumpkin hidden under its own large leaf was a priceless moment.  At the same moment, a woman appeared out of the neighbor’s house.  Someone I had never seen, nor heard before, during the years spent there.

She rushed over clothed in the body language of aggression and anger and adamantly claimed that pumpkin as her own.  As I assessed the entire situation, I stepped back a bit and explained that I had planted the seeds and that I was happy to share with her, because there would be more!  This did not change her stance,her mannerisms, or her mind! She was ready to fight and   just took what was obviously, in her mind, “hers”.  At that time, it was just as obvious in my mind, that those pumpkins were mine and had just wandered over the invisible border between the two houses.

This morning’s meditation freed me completely of that feeling of having something that was “mine” taken from me.  A beautiful realization came in, that in reality, nothing is mine, and at the same time, as I experienced being free of” mine”, a beautous lightness and purity expanded throughout my being.

This is a “fruit” that no one can take from I, the soul.  It is an inner treasure that has to be shared and in the sharing, will multiply.

With great thanks to the “aina” which provided the setting for that scene to unfold, as well as to that impromptu “character”, who I never saw again, who appeared out of the neighbor’s house.

There is another spiritual truth which says that every scene has benefit.  This particular scene proved to be a  foreshadowing in the plot of life which took  eight years to bring to fruition.

It was but a  moment in time, almost forgotten, yet planted in the subconscious awaiting its moment of truth to strut upon the stage of life and reveal its glory!

Om Shanti~I am a Peaceful and Grateful Soul~

Our thoughts influence our life.